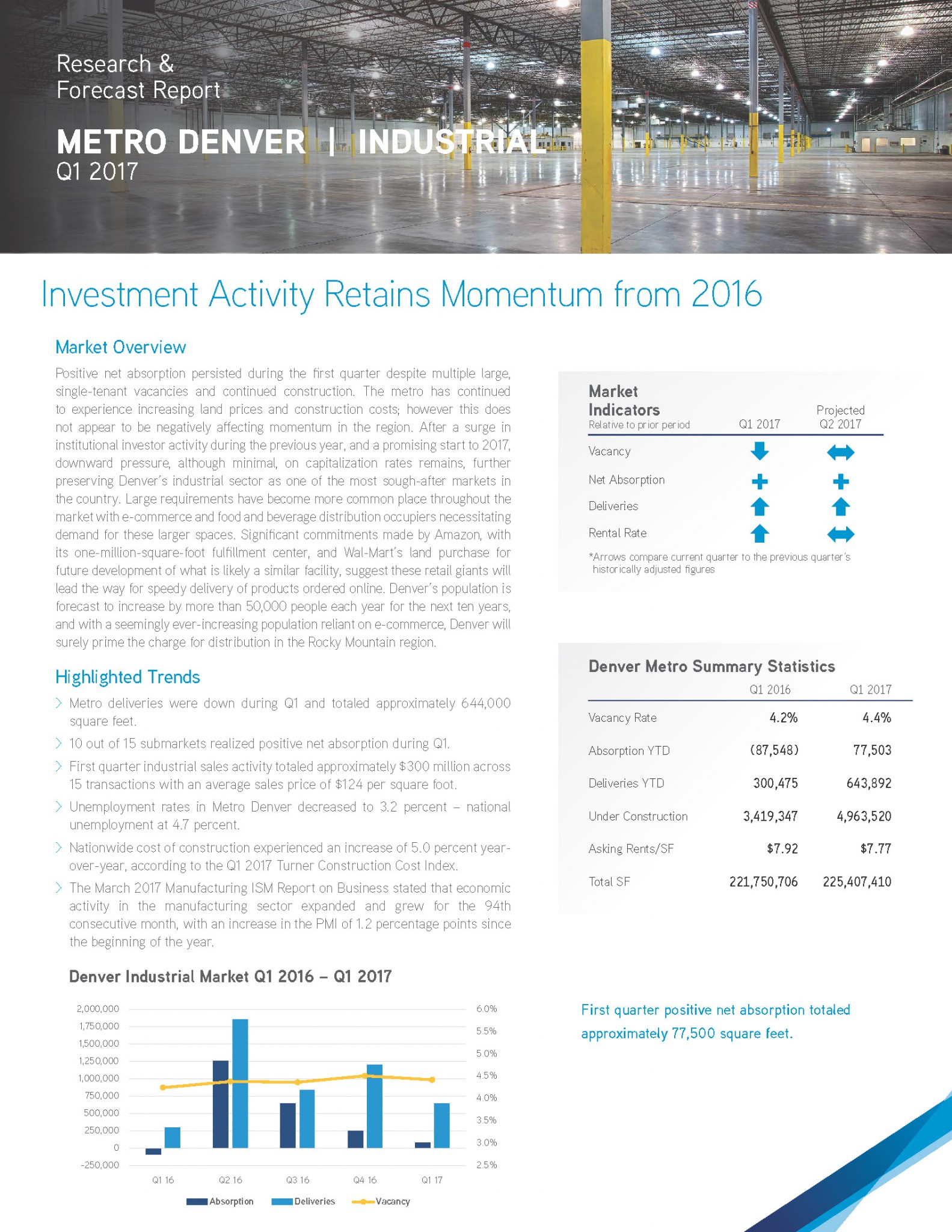 Positive net absorption persisted during the first quarter despite multiple large, single-tenant vacancies and continued construction. The metro has continued to experience increasing land prices and construction costs; however this does not appear to be negatively affecting momentum in the region. After a surge in institutional investor activity during the previous year, and a promising start to 2017, downward pressure, although minimal, on capitalization rates remains, further preserving Denver’s industrial sector as one of the most sough-after markets in the country. Large requirements have become more common place throughout the market with e-commerce and food and beverage distribution occupiers necessitating demand for these larger spaces. Significant commitments made by Amazon, with its one-million-square-foot fulfillment center, and Wal-Mart’s land purchase for future development of what is likely a similar facility, suggest these retail giants will lead the way for speedy delivery of products ordered online. Denver’s population is forecast to increase by more than 50,000 people each year for the next ten years, and with a seemingly ever-increasing population reliant on e-commerce, Denver will surely prime the charge for distribution in the Rocky Mountain region. 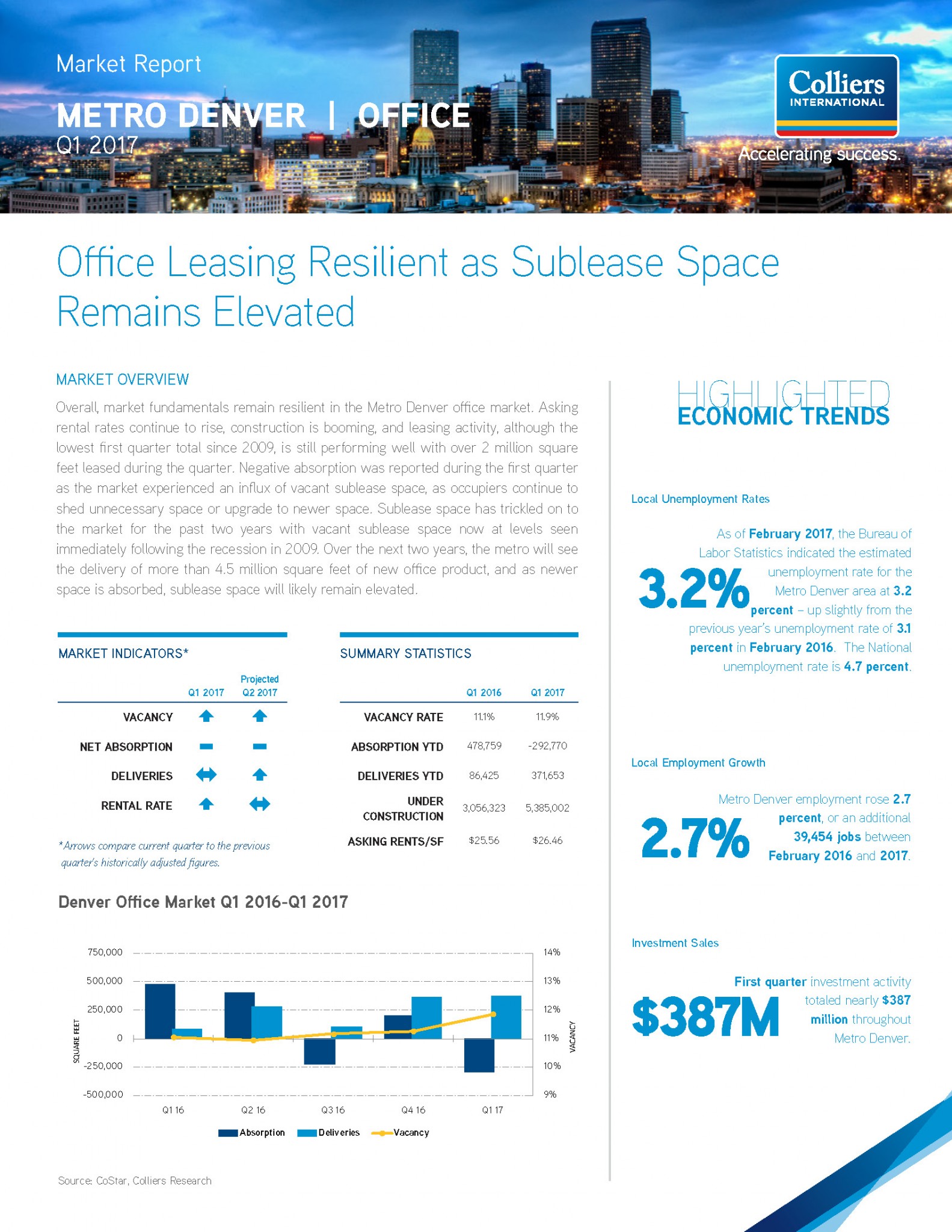 Overall, market fundamentals remain resilient in the Metro Denver office market. Asking rental rates continue to rise, construction is booming, and leasing activity, although the lowest first quarter total since 2009, is still performing well with over 2 million square feet leased during the quarter. Negative absorption was reported during the first quarter as the market experienced an influx of vacant sublease space, as occupiers continue to shed unnecessary space or upgrade to newer space. Sublease space has trickled on to the market for the past two years with vacant sublease space now at levels seen immediately following the recession in 2009. Over the next two years, the metro will see the delivery of more than 4.5 million square feet of new office product, and as newer space is absorbed, sublease space will likely remain elevated. 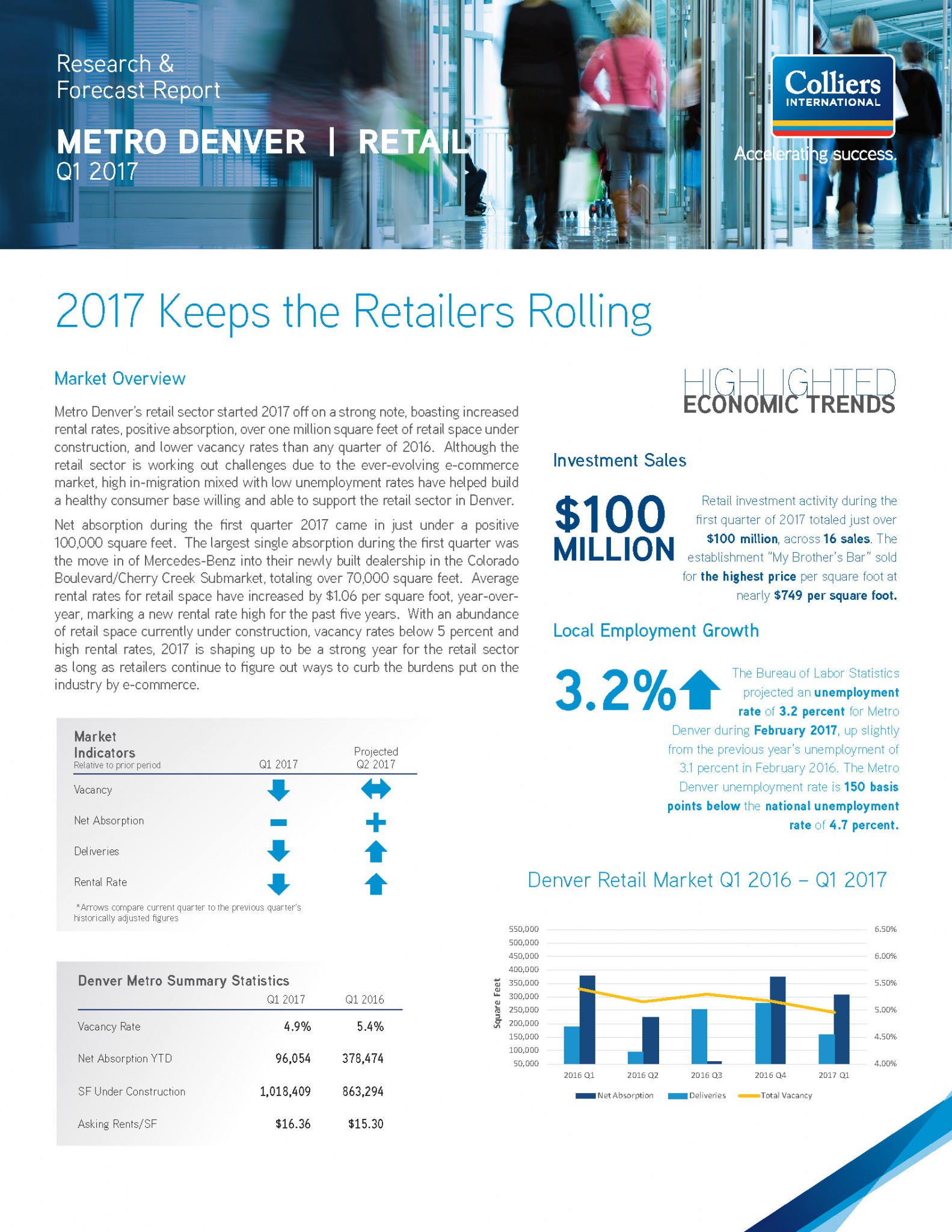 Metro Denver’s retail sector started 2017 off on a strong note, boasting increased rental rates, positive absorption, over one million square feet of retail space under construction, and lower vacancy rates than any quarter of 2016. Although the retail sector is working out challenges due to the ever-evolving e-commerce market, high in-migration mixed with low unemployment rates have helped build a healthy consumer base willing and able to support the retail sector in Denver.

Net absorption during the first quarter 2017 came in just under a positive 100,000 square feet. The largest single absorption during the first quarter was the move in of Mercedes-Benz into their newly built dealership in the Colorado Boulevard/Cherry Creek Submarket, totaling over 70,000 square feet. Average rental rates for retail space have increased by $1.06 per square foot, year-over-year, marking a new rental rate high for the past five years. With an abundance of retail space currently under construction, vacancy rates below 5 percent and high rental rates, 2017 is shaping up to be a strong year for the retail sector as long as retailers continue to figure out ways to curb the burdens put on the industry by e-commerce.