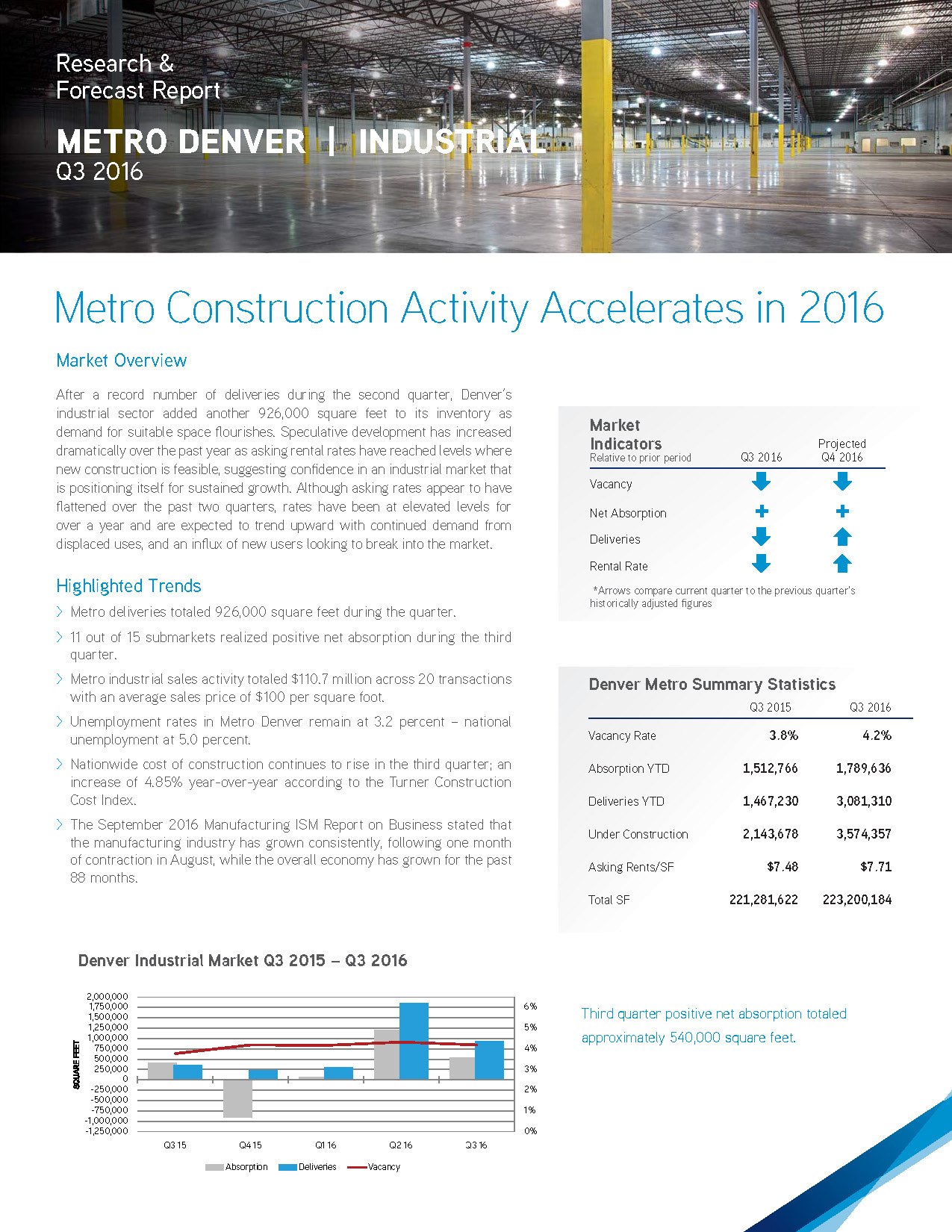 After a record number of deliveries during the second quarter, Denver’s industrial sector added another 926,000 square feet to its inventory as demand for suitable space flourishes. Speculative development has increased dramatically over the past year as asking rental rates have reached levels where new construction is feasible, suggesting confidence in an industrial market that is positioning itself for sustained growth. Although asking rates appear to have flattened over the past two quarters, rates have been at elevated levels for over a year and are expected to trend upward with continued demand from displaced uses, and an influx of new users looking to break into the market. 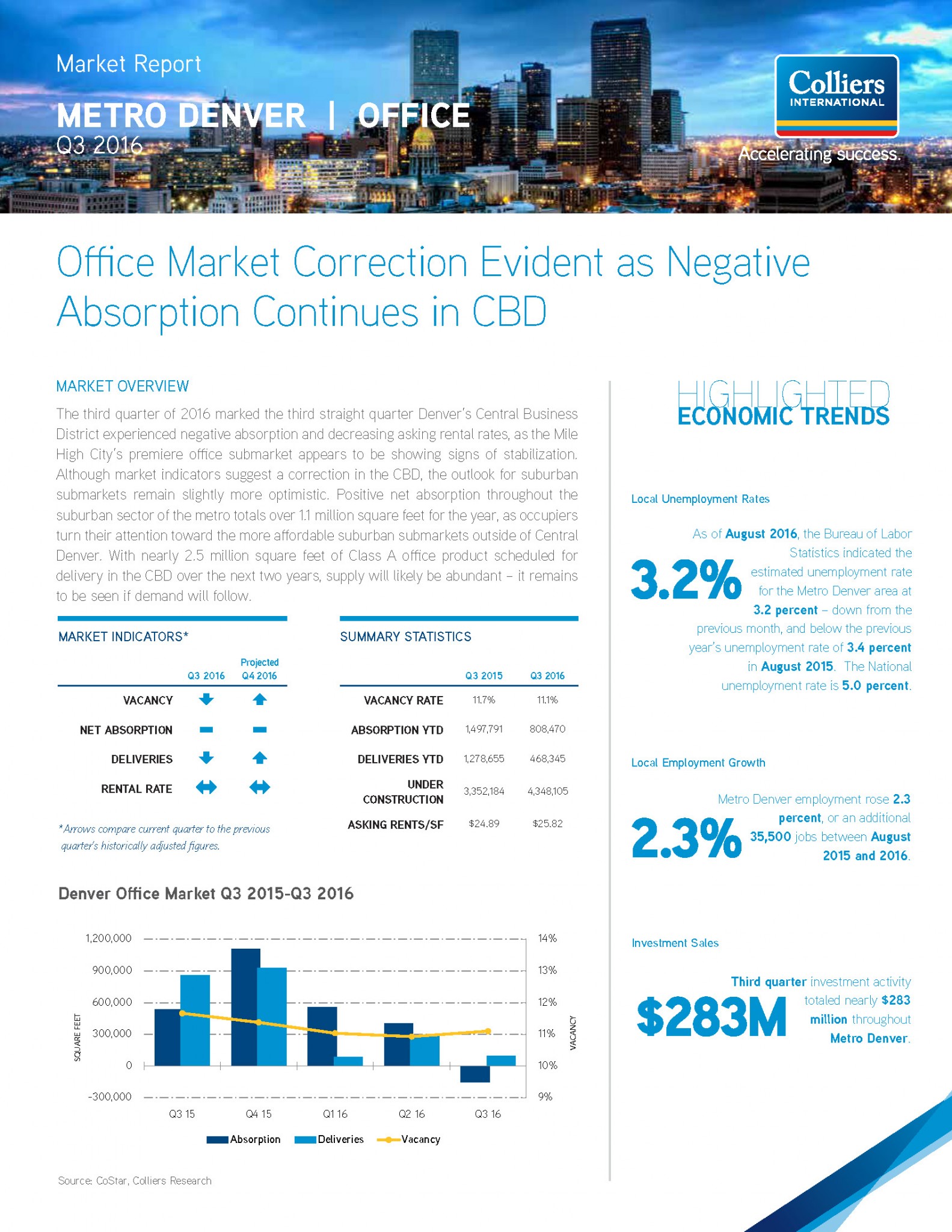 The third quarter of 2016 marked the third straight quarter Denver’s Central Business District experienced negative absorption and decreasing asking rental rates, as the Mile High City’s premiere office submarket appears to be showing signs of stabilization. Although market indicators suggest a correction in the CBD, the outlook for suburban submarkets remain slightly more optimistic. Positive net absorption throughout the suburban sector of the metro totals over 1.1 million square feet for the year, as occupiers turn their attention toward the more affordable suburban submarkets outside of Central Denver. With nearly 2.5 million square feet of Class A office product scheduled for delivery in the CBD over the next two years, supply will likely be abundant – it remains to be seen if demand will follow. 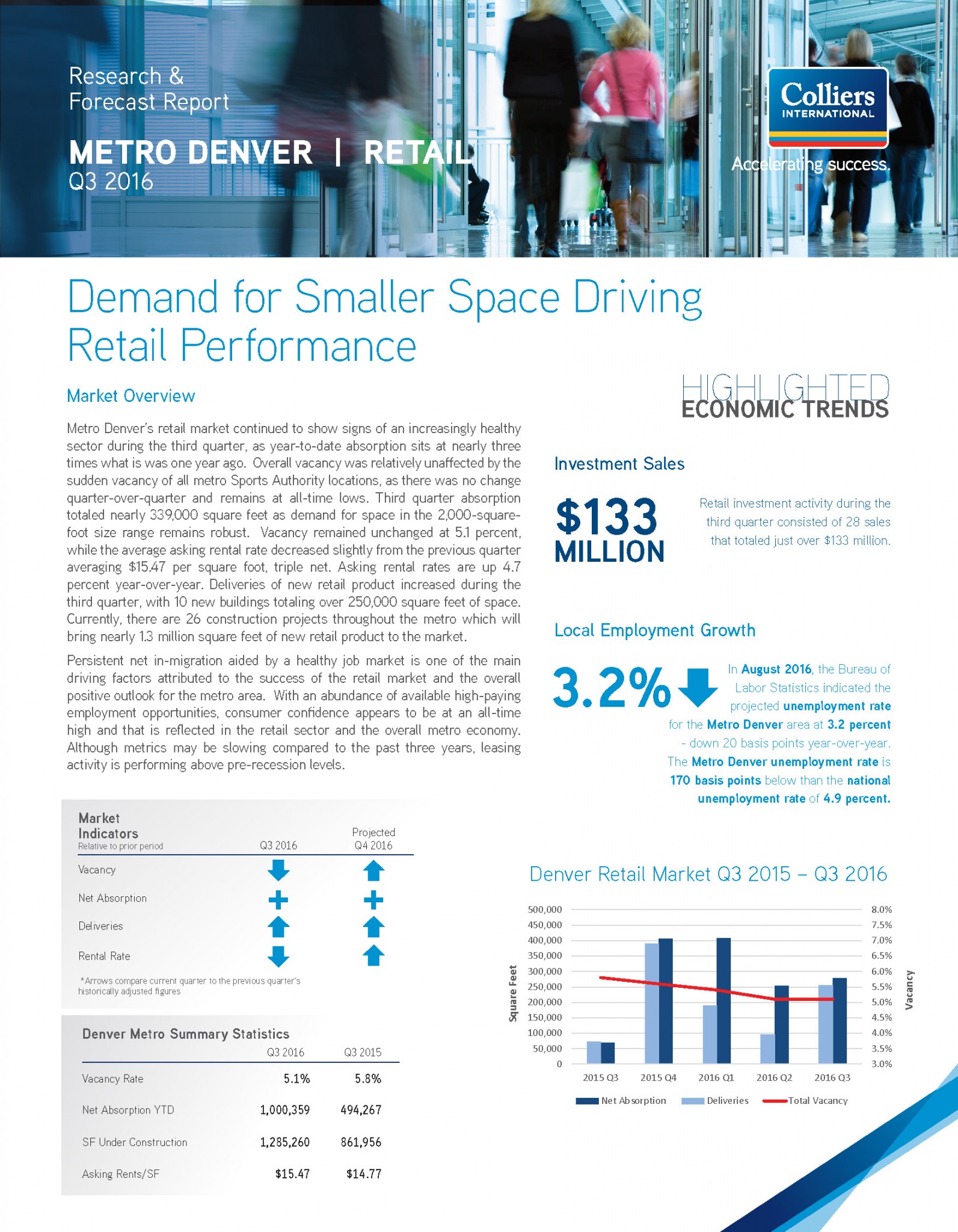 Metro Denver’s retail market continued to show signs of an increasingly healthy sector during the third quarter, as year-to-date absorption sits at nearly three times what is was one year ago. Overall vacancy was relatively unaffected by the sudden vacancy of all metro Sports Authority locations, as there was no change quarter-over-quarter and remains at all-time lows. Third quarter absorption totaled nearly 339,000 square feet as demand for space in the 2,000-square-foot size range remains robust. Vacancy remained unchanged at 5.1 percent, while the average asking rental rate decreased slightly from the previous quarter averaging $15.47 per square foot, triple net. Asking rental rates are up 4.7 percent year-over-year. Deliveries of new retail product increased during the third quarter, with 10 new buildings totaling over 250,000 square feet of space. Currently, there are 26 construction projects throughout the metro which will bring nearly 1.3 million square feet of new retail product to the market.

Persistent net in-migration aided by a healthy job market is one of the main driving factors attributed to the success of the retail market and the overall positive outlook for the metro area. With an abundance of available high-paying employment opportunities, consumer confidence appears to be at an all-time high and that is reflected in the retail sector and the overall metro economy. Although metrics may be slowing compared to the past three years, leasing activity is performing above pre-recession levels.