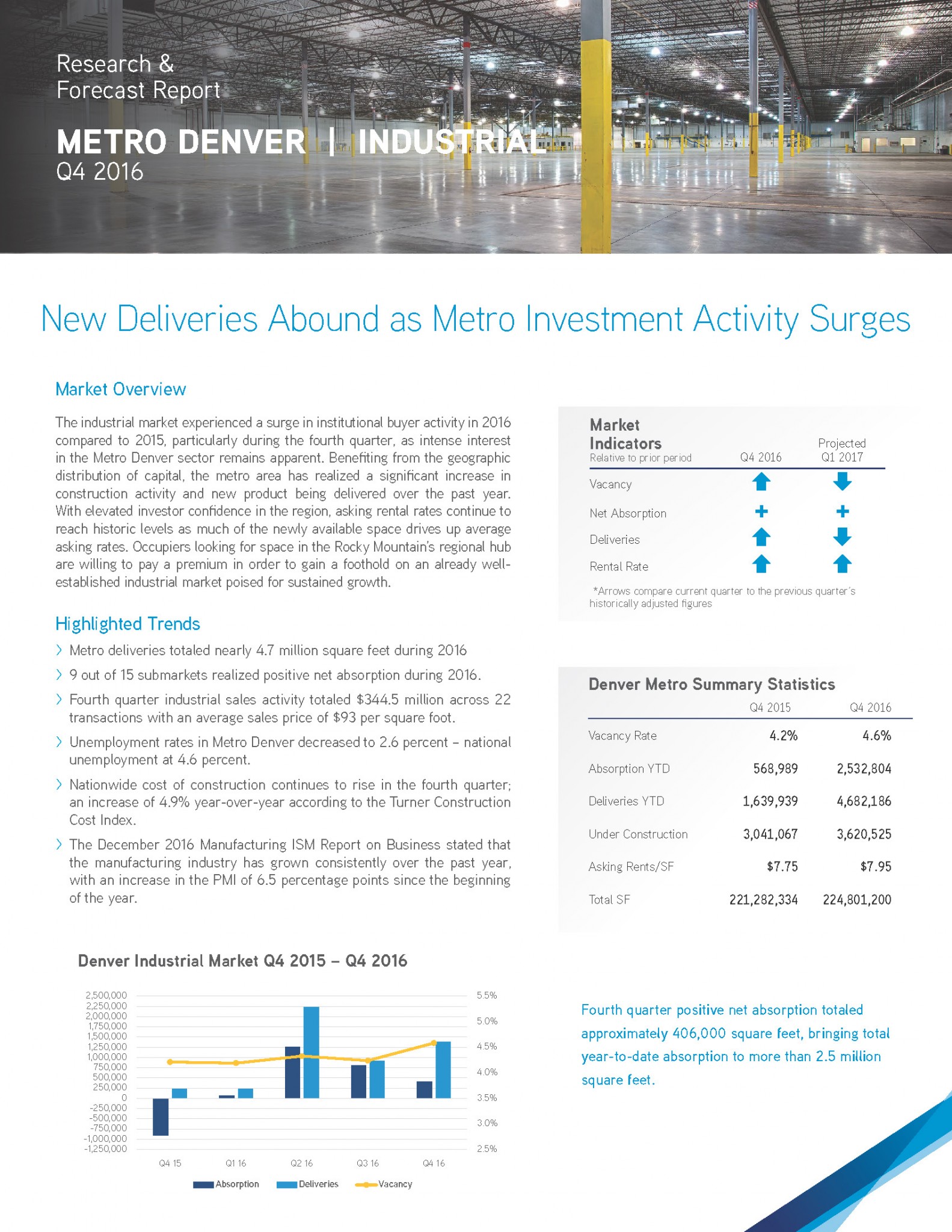 The industrial market experienced a surge in institutional buyer activity in 2016 compared to 2015, particularly during the fourth quarter, as intense interest in the Metro Denver sector remains apparent. Benefiting from the geographic distribution of capital, the metro area has realized a significant increase in construction activity and new product being delivered over the past year. With elevated investor confidence in the region, asking rental rates continue to reach historic levels as much of the newly available space drives up average asking rates. Occupiers looking for space in the Rocky Mountain’s regional hub are willing to pay a premium in order to gain a foothold on an already well-established industrial market poised for sustained growth. 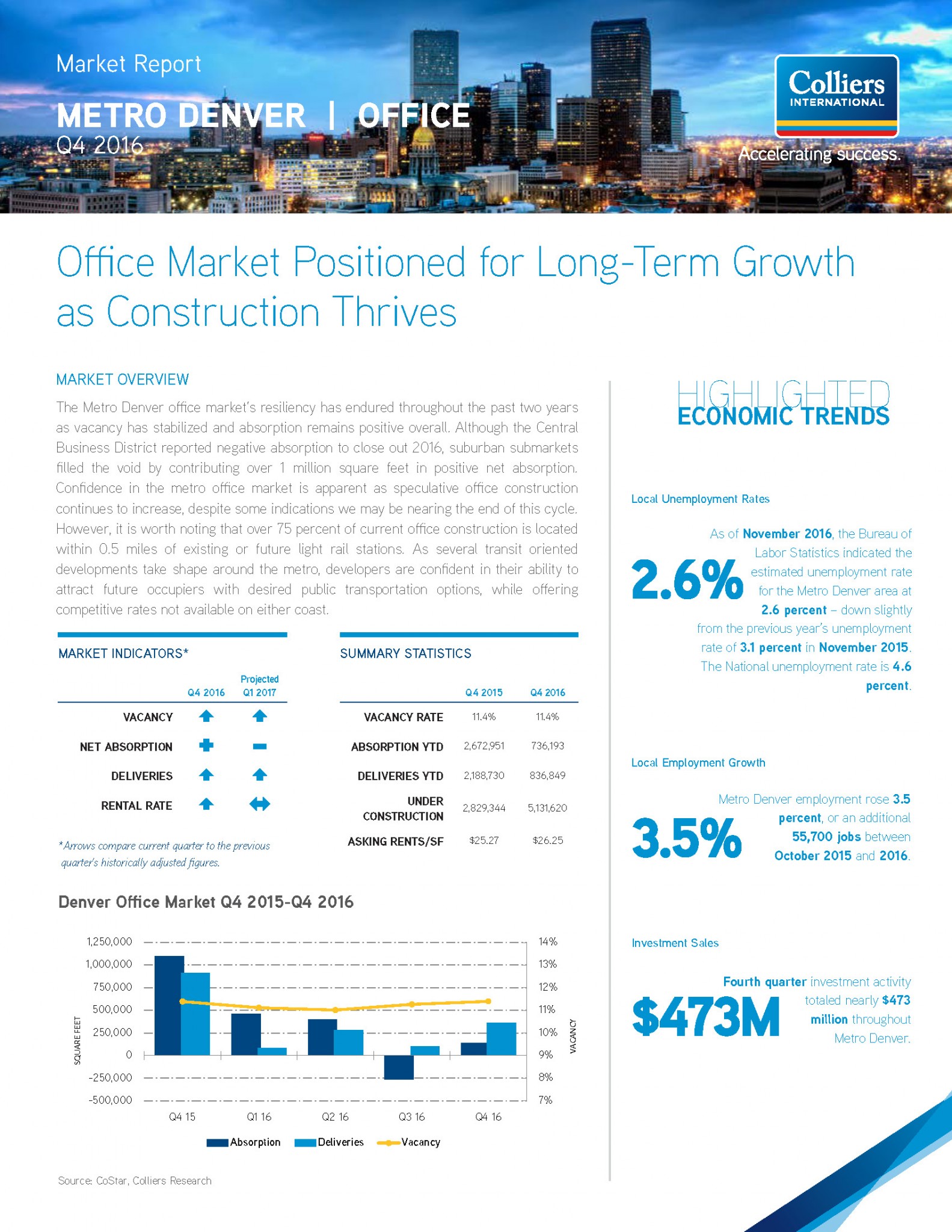 The Metro Denver office market’s resiliency has endured throughout the past two years as vacancy has stabilized and absorption remains positive overall. Although the Central Business District reported negative absorption to close out 2016, suburban submarkets filled the void by contributing over 1 million square feet in positive net absorption. Confidence in the metro office market is apparent as speculative office construction continues to increase, despite some indications we may be nearing the end of this cycle. However, it is worth noting that over 75 percent of current office construction is located within 0.5 miles of existing or future light rail stations. As several transit oriented developments take shape around the metro, developers are confident in their ability to attract future occupiers with desired public transportation options, while offering competitive rates not available on either coast. 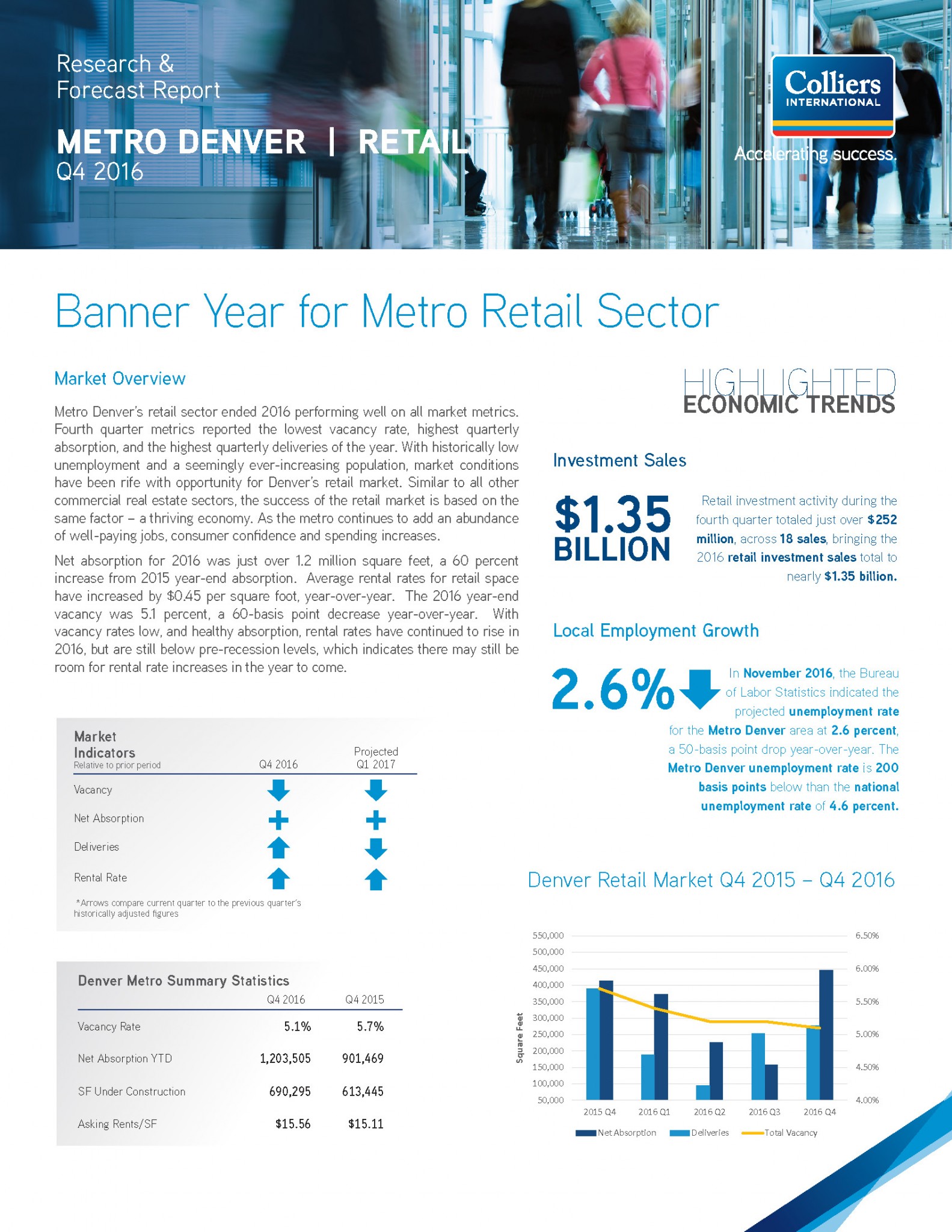 Metro Denver’s retail sector ended 2016 performing well on all market metrics. Fourth quarter metrics reported the lowest vacancy rate, highest quarterly absorption, and the highest quarterly deliveries of the year. With historically low unemployment and a seemingly ever-increasing population, market conditions have been rife with opportunity for Denver’s retail market. Similar to all other commercial real estate sectors, the success of the retail market is based on the same factor – a thriving economy. As the metro continues to add an abundance of well-paying jobs, consumer confidence and spending increases.

Net absorption for 2016 was just over 1.2 million square feet, a 60 percent increase from 2015 year-end absorption. Average rental rates for retail space have increased by $0.45 per square foot, year-over-year. The 2016 year-end vacancy was 5.1 percent, a 60-basis point decrease year-over-year. With vacancy rates low, and healthy absorption, rental rates have continued to rise in 2016, but are still below pre-recession levels, which indicates there may still be room for rental rate increases in the year to come.