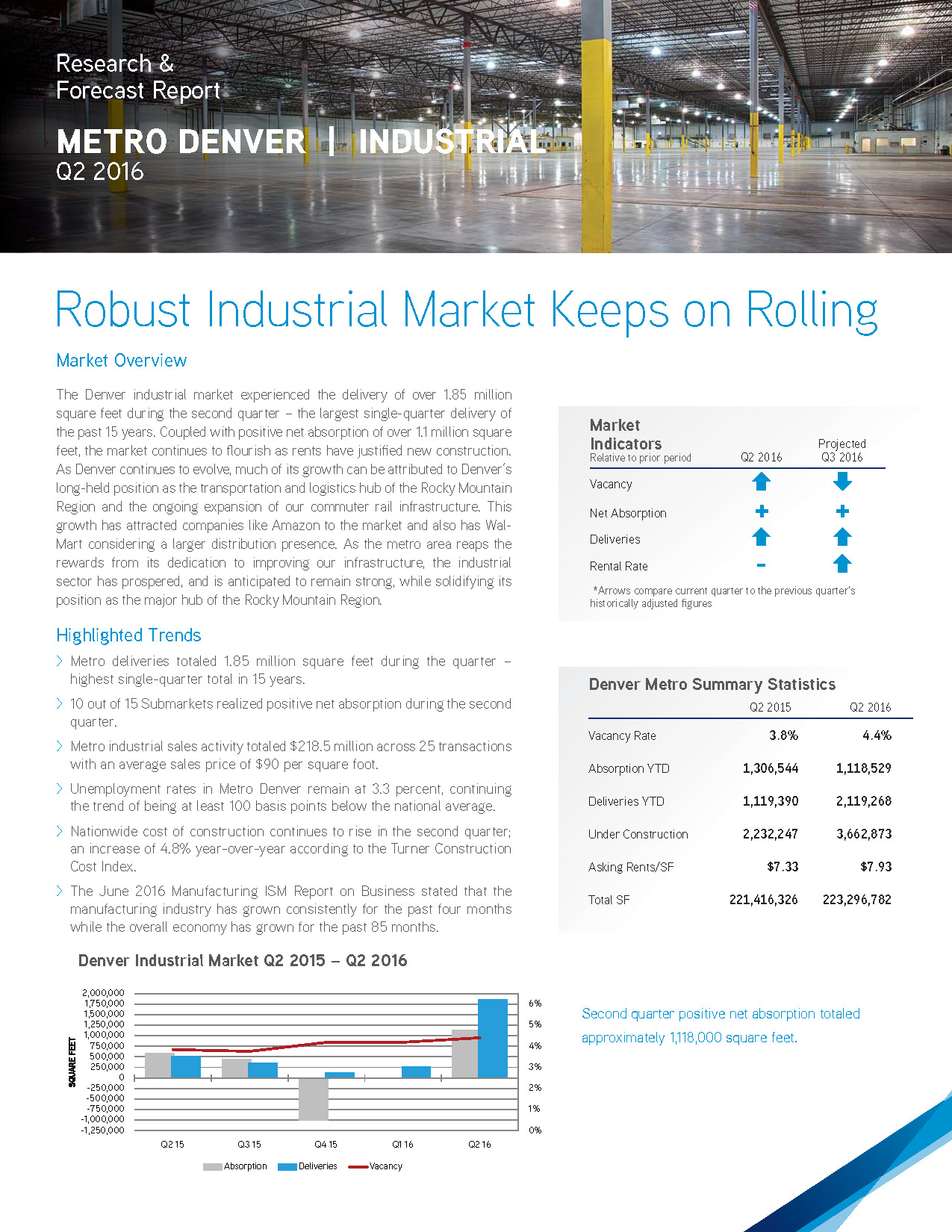 The Denver industrial market experienced the delivery of over 1.85 million square feet during the second quarter – the largest single-quarter delivery of the past 15 years. Coupled with positive net absorption of over 1.1 million square feet, the market continues to flourish as rents have justified new construction. As Denver continues to evolve, much of its growth can be attributed to Denver’s long-held position as the transportation and logistics hub of the Rocky Mountain Region and the ongoing expansion of our commuter rail infrastructure. This growth has attracted companies like Amazon to the market and also has Wal-Mart considering a larger distribution presence. As the metro area reaps the rewards from its dedication to improving our infrastructure, the industrial sector has prospered, and is anticipated to remain strong, while solidifying its position as the major hub of the Rocky Mountain Region. 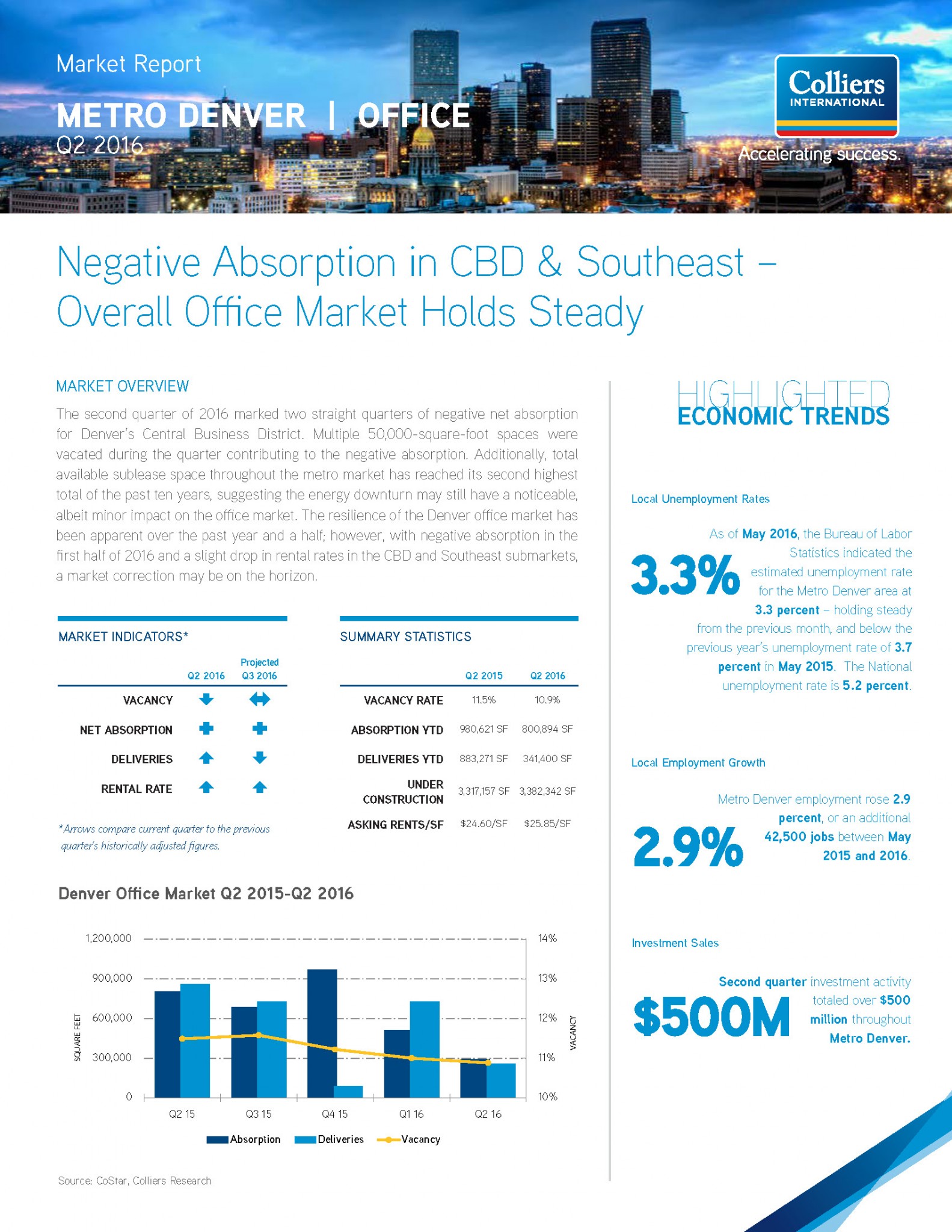 The second quarter of 2016 marked two straight quarters of negative net absorption for Denver’s Central Business District. Multiple 50,000-square-foot spaces were vacated during the quarter contributing to the negative absorption. Additionally, total available sublease space throughout the metro market has reached its second highest total of the past ten years, suggesting the energy downturn may still have a noticeable, albeit minor impact on the office market. The resilience of the Denver office market has been apparent over the past year and a half; however, with negative absorption in the first half of 2016 and a slight drop in rental rates in the CBD and Southeast submarkets, a market correction may be on the horizon. 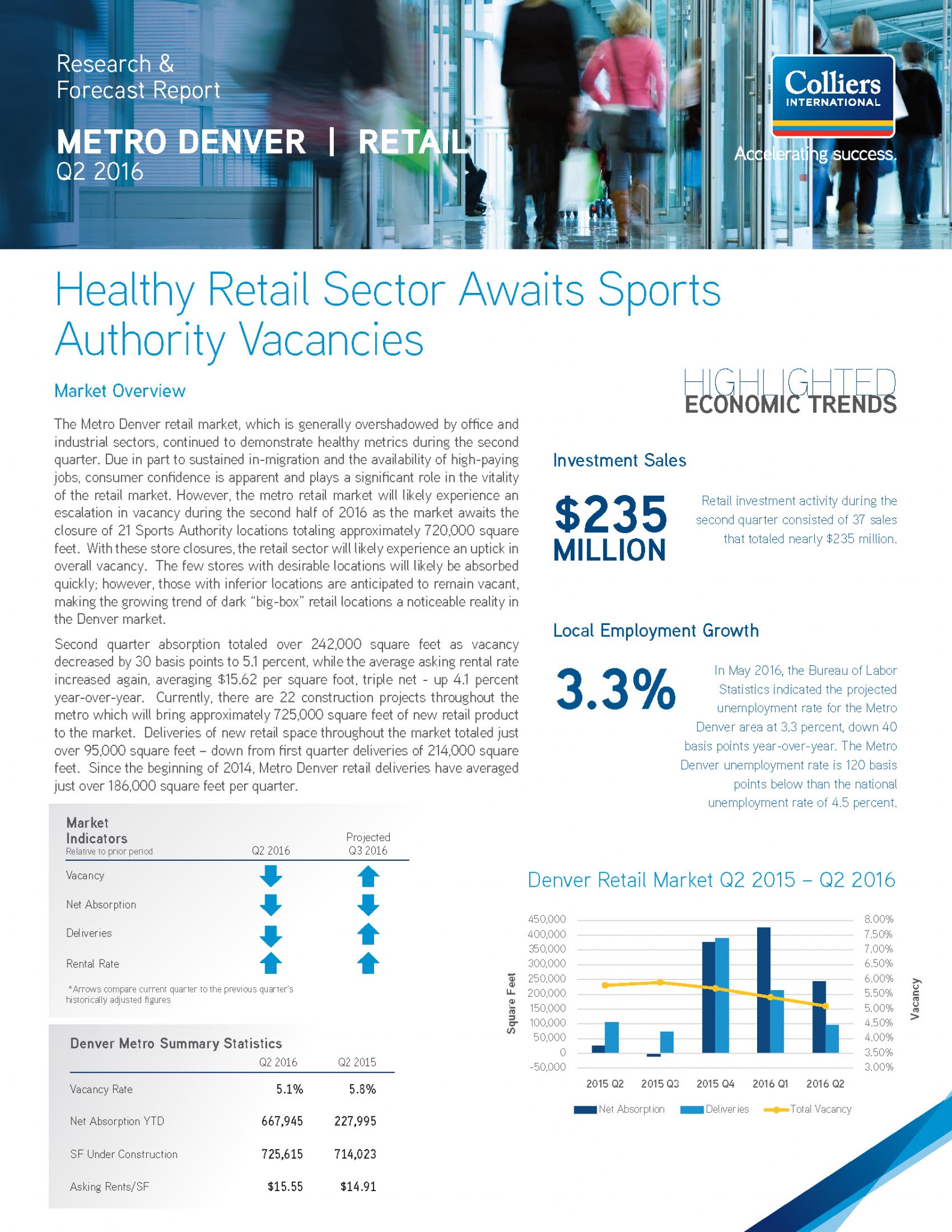 The Metro Denver retail market, which is generally overshadowed by office and industrial sectors, continued to demonstrate healthy metrics during the second quarter. Due in part to sustained in-migration and the availability of high-paying jobs, consumer confidence is apparent and plays a significant role in the vitality of the retail market. However, the metro retail market will likely experience an escalation in vacancy during the second half of 2016 as the market awaits the closure of 21 Sports Authority locations totaling approximately 720,000 square feet. With these store closures, the retail sector will likely experience an uptick in overall vacancy. The few stores with desirable locations will likely be absorbed quickly; however, those with inferior locations are anticipated to remain vacant, making the growing trend of dark “big-box” retail locations a noticeable reality in the Denver market.